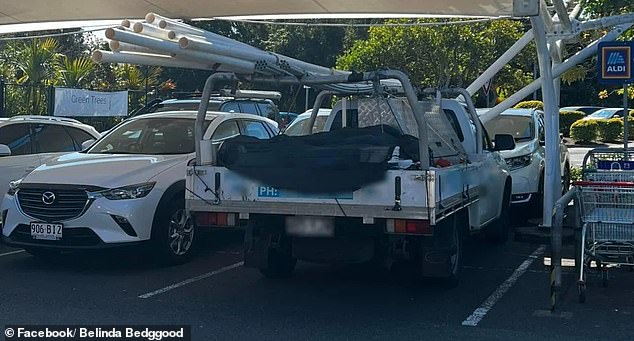 Driver is slammed for ‘very dangerous’ park in mall – so can you see what the problem is?

An Australian driver has been criticized for an ‘unsafe’ park outside a shopping center which caused motorists to maneuver around the vehicle.

A frustrated motorist shared a photo of a white ute in a car park near an Aldi store in Queensland on Wednesday to the North Lakes Facebook group.

At first glance, the ute appears to be parked properly within the lines of the parking space.

However, another angle showed several pipes, which appear to be over three meters long, protruding from the rear of the vehicle.

The pipes, which appear to be over three meters long, required drivers to maneuver around the ute (pictured)

The message called the pipes a “major hazard” because they posed a safety risk and forced motorists to avoid the vehicle widely.

‘Is this legal?? Cars had to drive,” one Facebook user wrote.

A third user commented, “He’ll find out how legal or not it is when someone walks past that load and hits it with their car, or even face it if it’s a pedestrian.”

‘I guarantee you that [they’ll] be in a lot of trouble.

The legal overhang limit for items on a vehicle is 3.7 meters from the front wheel, according to the Queensland Government Transport website.

The website explains that any visible load protruding more than 1.2 meters from the rear of a vehicle or trailer must display a warning device.

A brightly colored red or yellow flag may be used during the day while at night a red warning light visible at least 200 meters away must be used.

Despite the overwhelming criticism, some Facebook users defended the driver, saying he “didn’t mean to hurt anyone”.

“Poor guy is hurting himself trying to make a buck,” one user commented.

“Not the smartest place to park, but he probably just had a 10 hour day and rushed out to buy a hot meal for dinner.”

Another user wrote, “I didn’t mean to hurt anyone or plan to cause (any) inconvenience.”

The legal overhang limit for items on a vehicle is 3.7 meters from the front wheel, according to the Queensland Government Transport website (pictured).