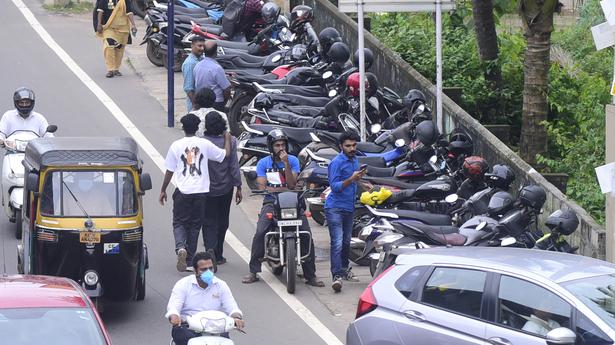 Randomly parked vehicles are once again back on the city’s cobblestone pathways, impeding the free flow of pedestrians and defying the occasional wheel-clamping drive by police. The majority of offenders are motorcyclists who even dare to ride on the tile-paved surface to occupy a convenient spot.

“We are forced to walk near the crowded road because there is no pedestrian space on the paths. If the number of people depending on these dedicated lanes is less, it is not a problem. But their number keeps increasing,” said Sunitha Sathyan, a martial arts trainer. carelessly on the sidewalk without caring about pedestrians.

Since violations of parking rules only result in a small fine, such violations are common near malls, food courts, and roadside stalls. There are also people who regularly leave vehicles for hours at a particular location. Despite the increase in the number of approved wayside parking spaces, there is no respite from the misuse of pedestrian space.

“On Mavoor Road and Arayidathupalam, pedestrians are at the reception. Although police often issue fines to offenders, no action has been taken to prevent such vehicles from entering the same locations,” said Aneesh Anand, an employee of a major private sector bank in the city. He added that the lack of convenient parking spaces exclusively for two-wheelers in the city was also a trigger for such violations.

A few pedestrians who regularly use the footpath near Arayidathupalam argued that this reckless practice could be stopped if the police agreed to use recovery vans. Vehicles spotted in restricted areas should be removed immediately, in addition to slapping their owners with hefty fines, they said.