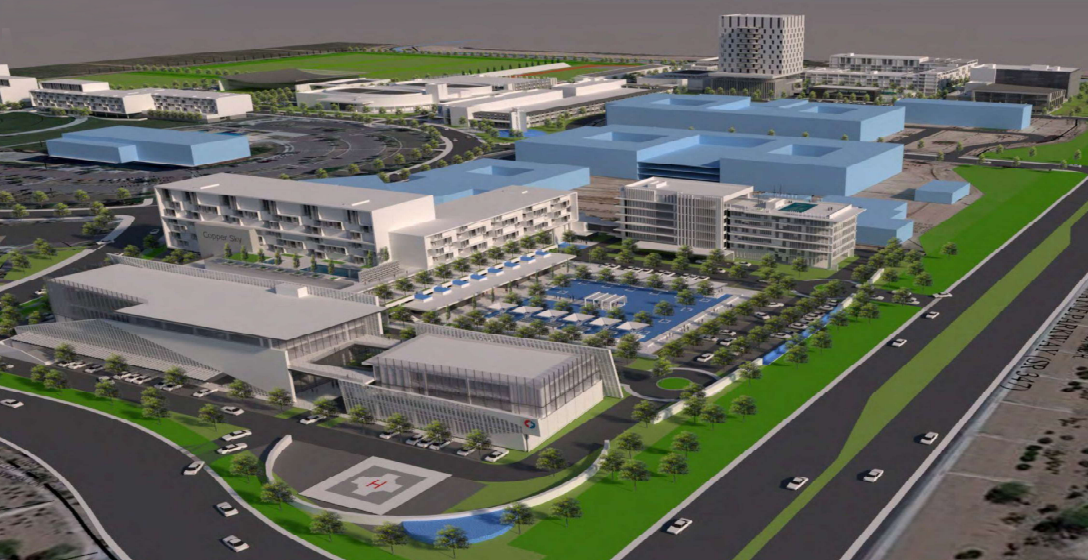 As InMaricopa has previously reported the campuses, which would consist of two phases, would be near the southeastern corner of North John Wayne Parkway and West Bowlin Road.

The medical campus, which would include the hospital, medical office space, apartments, condominiums, hotel and sports academy, would be approximately 559,000 square feet on 14.3 acres near the southeastern corner of North John Wayne Parkway and West Bowlin Road.

The innovation campus would be at the northeastern corner of North John Wayne Parkway and Martin Luther King Jr. Boulevard. It would cover 12 acres and have more than 1 million square feet of building space.

The council this week moved the project forward by rezoning the land from general mixed use and transitional to planned area development.

If completed as envisioned, the campus would be home to the tallest buildings in the city, including a high-end hotel and a condominium building/extended stay hotel, each proposed for seven stories at 100 feet.

According to Rudy Lopez, Maricopa development services director, the area development plan zoning sets parameters to ensure the development provides exceptional standards and creativity for the community, including:

“This project is expected to contribute to Maricopa’s economy in a variety of ways, not only creating construction jobs, but health-care jobs once the construction is complete,” Steele said. “Then, there are the ancillary jobs and development that follow, from restaurants, to hotels or anything else that serves the area. We celebrate this project and all others that are progressing.”

Plans call for 13 buildings across both campuses, including two smart parking structures. Johnson estimated that completion of the full project would take four to five years.

The proposed development would include related site improvements for parking, vehicular and pedestrian circulation, and medical helicopter transport services.

According to S3 BioTech board member Ed Johnson, the campus would create up to 11,500 construction jobs and 3,000 permanent jobs in the medical industry. The project’s 30-year tax benefit to the city is estimated at $4.5 billion.

The city’s second hospital, to be operated by Houston-based Nutex Health, is being developed by S3 BioTech as an emergency specialty hospital of at least 100,000 square feet and 25 beds. The project would include medical services facilities, an ambulatory surgery center, a catheterization laboratory and offices to house medical practices and other medical services.

Johnson said he hoped the hospital could be operational by the end of 2023.

Nutex Health was founded in 2011 and has micro-hospitals in Chandler and Tucson. It primarily operates in its home state of Texas, where it owns 15 of its 24 hospitals. It also has facilities in Arkansas, Indiana, Kansas, Louisiana, New Mexico and Oklahoma, and four more are in development.

2023 Lexus IS lineup expands with new trims and colors