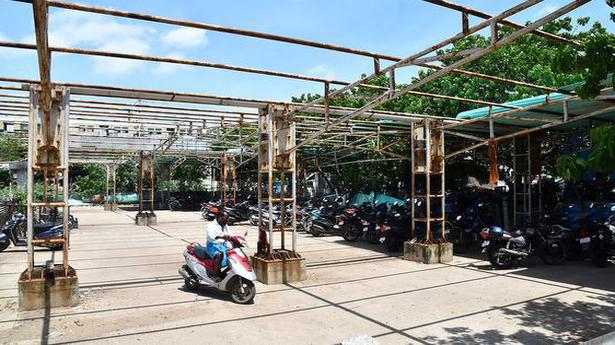 With the Southern Railway restoring 95% of commuter service and easing travel restrictions, train occupancy is back to pre-COVID-19 levels.

For commuters traveling between the city and remote suburbs, parking lots are a crucial link in last mile connectivity. These facilities have been closed in many stations and those that are functioning are in poor condition.

At several stations such as Egmore, St. Thomas Mount, Palavanthangal, Tiruvallur, Chengalpattu and Kancheepuram, only one of the two car parks on either side of the station has contractors.

Likewise, the Tambaram, Velachery and Guindy stations have developed into transport hubs. But commuters have to take a detour to reach the parking lot. There are no parking contractors on the side where a large portion of commuters board the trains.

A. Roy Rozario, president of the Pattabiram Railway Passengers Association, said commuters to these stations had to park their vehicles in private “shelters”.

J. Ranganathan, Secretary, Kanchipuram-Chennai Rail Commuters’ Association, highlighted a host of issues such as no roof, poor lighting, fuel theft and loss of vehicle accessories and contractors being rude with customers in the parking lot.

Mr Ranganathan said the condition of most parking lots at stations was dismal, with no tin roof provided to protect expensive vehicles. These courtyards did not have a concrete floor.

Officials of rail passenger associations and regular commuters have criticized the rail administration for failing to ensure contractors meet safety standards such as CCTV cameras, posting details of parking charges for various categories of vehicles and the cell phone number of the parking contractor.

A senior official from the Southern Railway Chennai division said 43 stations have parking lots. Of these, 27 had appointed permanent contractors after the COVID-19 lockdown was lifted. While the Southern Railway put out a tender for the award of 11 parking contracts, five did not yet have a contractor to manage the space. The railway official said that in Velachery a contractor was available on the south side. In Thiruvanmiyur, the contract ended in August and the call for tenders was launched. There was a bad response to the tender due to the huge amount of the contract. The railway official said the CCTV cameras and shelters were to be installed by the license holder in the parking lot.

Portland General Council candidates share their positions on housing, shelter and other priorities