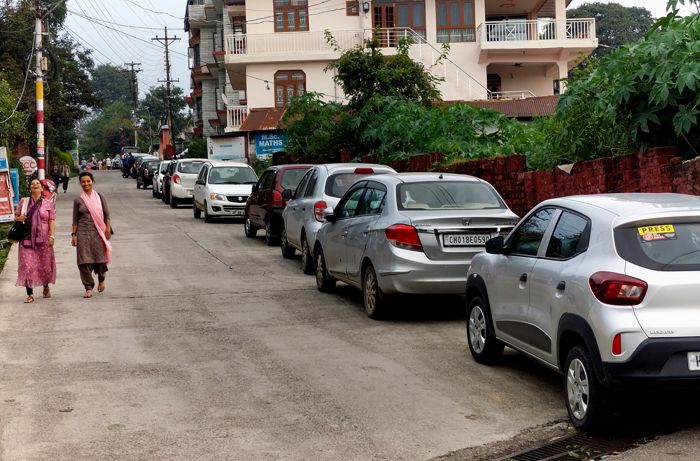 Lack of proper parking spaces is fast becoming the bane of Dharamsala and its surrounding tourist spots. Traffic jams become commonplace in the city even during the tourist lean season.

Motorists are forced to park their vehicles on the sides of the roads bringing them into direct confrontation with traffic officers who insist on fining them through challans. On their side, people claim that there is no parking space available anywhere.

The traffic problem has gotten so bad that there are traffic jams even on routine days in Dharamsala. The linear development of the city along the roads is the main cause of traffic problems.

In the city of Dharamsala, there are two main markets – Kachehri market near the local secretariat and Kotwali market. Both markets have limited public parking. People have to park their vehicles along the roads, which leads to traffic jams and sometimes accidents. At Kotwali market, the local council is trying to create a public parking space, but work is very slow.

In Kachehri or the civil lines area, there is no public parking. Most of the vehicles are parked at the roadside or in the secretariat’s mini car parks which remain full with the vehicles of the locals coming to the offices for their work.

In McLeodganj, the main tourist hub, the only public car park at the entrance is in the throes of controversy for being overloaded. A few years ago, the foundation stone for a parking lot near the Dalai Lama temple was laid. However, work is progressing at a slow pace. The result is that most commercial vehicles that bring tourists here are parked on the side of the road.

At Bhagsunag, another famous tourist spot in the region, there is only one parking space which is insufficient during the tourist influx season. In Bhagsunag and McLeodganj, illegal constructions are the main reason for traffic congestion. In accordance with the rules set by the district and town planning authorities, any commercial building entering the zone must have a specified parking space on the ground floor. However, people who are raising hotels and commercial complexes in the area are not keeping up with the standards and are not developing any parking spaces.

The result is that all the pressure from entering vehicles is on public parking spaces and limited roadsides.

The district, town planning and city council authorities have not taken action against illegal construction or forced those constructing new buildings to dispose of parking spaces according to the rules. Many new malls are springing up in Dharamsala region for which the parking space should be made compulsory in the basement, otherwise the traffic situation in the city will deteriorate.

The government has announced various new projects. However, the problem of parking in Dharamsala continues to grow and parking lots are not being built as a priority.

Kangra Deputy Commissioner Nipun Jindal said the MC of Dharamsala has been asked to expedite work on ongoing parking projects in the city.

Work is progressing at a slow pace

When your college dorm is a Walmart parking lot, the American dream is shattered