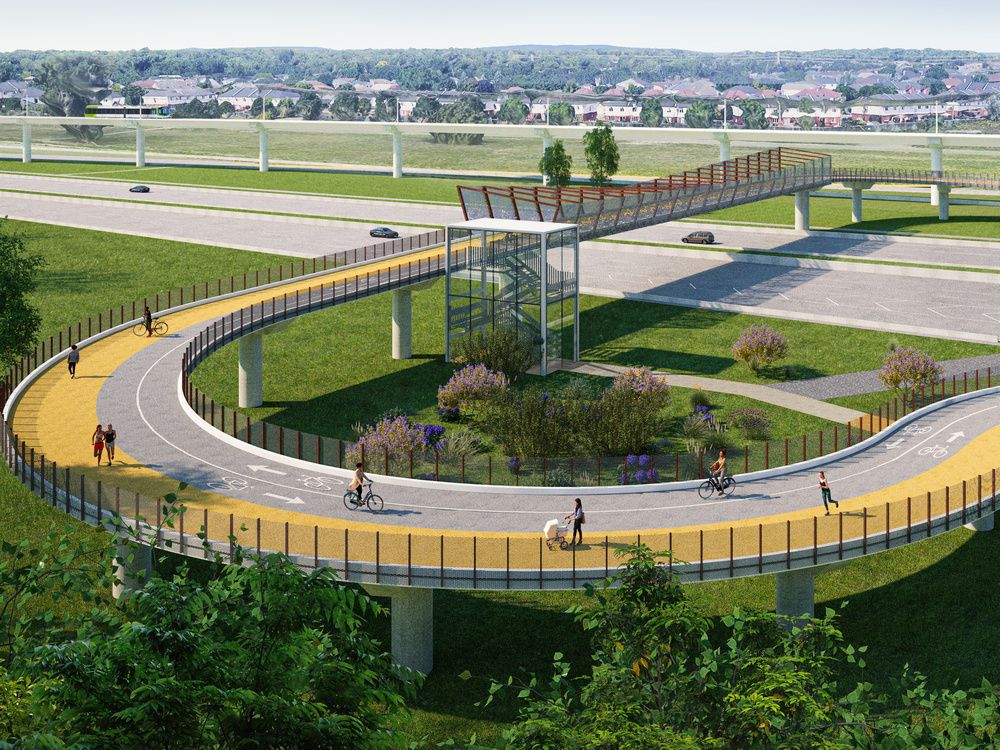 Kirkland Mayor Michel Gibson hailed the City of Montreal’s recent announcement to build a pedestrian and cyclist bridge over Highway 40 near the future Kirkland REM station.

The new viaduct, which will be operational by 2027, will be part of Montreal’s Réseau express vélo (REV), a 184-kilometre cycling network that will also facilitate access to the future Grand Parc de l’Ouest.

Sign up to receive daily news from the Montreal Gazette, a division of Postmedia Network Inc.

Thank you for your registration!

A welcome email is on the way. If you don’t see it, please check your spam folder.

The next issue of Montreal Gazette Headline News will soon be in your inbox.

We encountered a problem during your registration. Try Again

While this is good news for cyclists looking to cross Highway 40, Gibson said Kirkland is still pushing for parking spaces at the new REM station being built next to the RioCan Center and Parc des Bénévoles. He said having dedicated bike lanes and walking paths near the REM is a good idea for people who live near a train station, but added that most West End residents Island still depend on automobile to get around. He said parking spaces were still needed.

“What we want are parking spaces reserved for residents of Kirkland only. But that hasn’t been done yet,” he said.

“Promoter Broccolini, who owns 50% of the RioCan site, knows what we want,” he added. “It can be underground or above ground (parking). They know our needs. So if they need a permit to do anything on this site, they will have to provide over 200 parking spaces.

In 2021, Broccolini Real Estate Group and RioCan Real Estate Investment Trust announced a partnership in a major redevelopment project at the Rio-Can Center site in Kirkland. The massive project covers approximately 240,000 square feet of office space and 135,000 square feet of retail space, including a residential component.

Gibson indicated that two traffic studies have already been carried out taking into account possible future residential and commercial developments around the REM.

“The first study showed that the number of units (developers) sought did not correspond to the existing infrastructure. We asked our administration to do another traffic study to see how 200 to 500 spaces would fit into the current infrastructure. The council decided that we could put roughly 200 to 300 places there.

Gibson said local residents are also being asked to provide input on future Société de transport de Montréal (STM) bus routes that will take passengers to the REM. The population was invited to register for the public consultations of the STM, which plans to rethink the city’s vast bus network in anticipation of the future REM network.

Residents of Kirkland, Pointe-Claire and Beaconsfield will be consulted on Thursday, October 27 at 6:30 p.m.

Gibson said there will be a bus terminal near the Kirkland REM station. “It will be a bit like the one at the Fairview mall. There will also be a drop zone.

He specifies that not all bus lines will be affected by the arrival of the REM.

“The routes will basically remain the same. There will probably be fewer buses going to Saint-Charles or Henri-Daoust, because the new urban boulevard (between rue Antoine-Faucon in Pierrefonds and chemin Ste-Marie) will become a bus lane and a pedestrian and bicycle lane . Thus, most buses from Pierrefonds will head towards Antoine-Faucon Street. and heads towards the REM station along the old Highway 440 right-of-way.”

He said more local cycle routes are planned in the area.