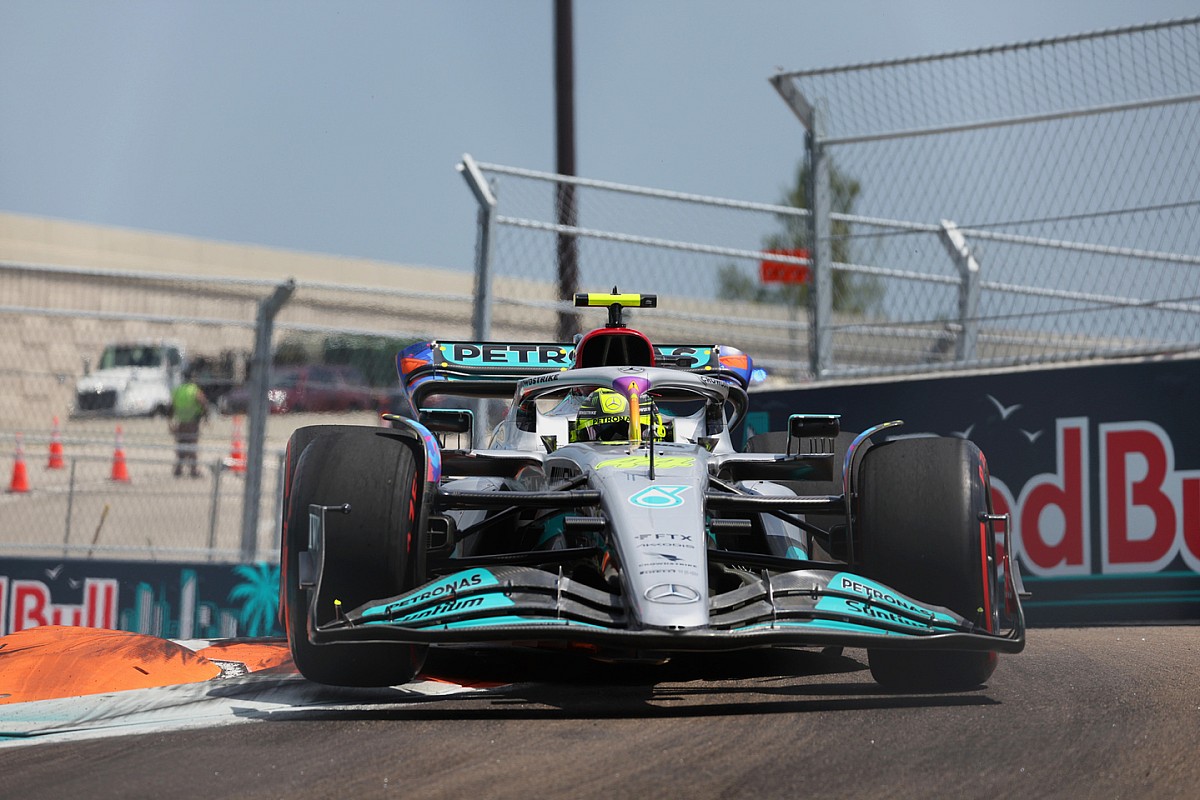 While Hamilton escaped all major drama on a day when a number of other drivers ran into trouble around the new F1 venue, he was far from impressed with the sequence of corners heading into the long final straight .

The elevated chicane at Turn 14/15, which runs under a toll road, was designed to generate errors that expose drivers to a potential challenge from behind on the subsequent descent to the final corner.

However, the ultra-compact nature of the complex, with pilots having to attack the curbs at reduced speeds, did not impress the seven-time champion.

“The track is quite nice to drive except for the chicane,” Hamilton said. “It’s so tight.

“It reminds me of being in a B&Q parking lot when I was six/seven, in a kart, between cars.

“It’s a corner where maybe in the future they can remove that one and it will improve the track.”

Hamilton also said he wasn’t too happy with how bumpy the track was on the first day of racing.

“It’s kind of crazy when you think people in our time should be able to make a flat road relatively easy,” he said.

“There were big, big, big bumps and so many places where the track joined somewhere else. So I don’t know if they will be able to rectify that overnight and make it better.

But not all the drivers were so put off by the circuit, with Kevin Magnussen saying he really enjoyed the challenge of the chicane.

“That’s pretty cool,” he said. “It’s not as thrilling as the high-speed corners, but it’s very blind and it’s like going over a ridge with big curbs and big low-speed direction changes.

“It’s quite unique, I would say, so cool that way. But it’s obviously very slow.

One of the main issues on the opening day of action, which sparked a number of incidents, was the dirty track surface. This meant that if the riders veered away from the racing line, they were almost guaranteed to spin.

Red Bull driver Sergio Perez feared that if the situation did not improve it would not bode well for the race.

“I’m extremely disappointed that there’s no offline grip,” he said. “It’s a shame, because I think the race will be bad because of that.

“As soon as you try to disconnect, there’s no outlet. It is done. It feels very gritty offline. So the race will be tough.”

Alfa Romeo driver Valtteri Bottas, however, liked the challenges of the layout, as he predicted a thrilling race on Sunday.

“It’s not an easy track, that’s for sure,” he told Motorsport.com. “Certainly when the track is green it can happen more easily. But once you’re slightly disconnected, if you lose the rear you can’t catch it anymore.

“That technical section of turns 12 to 15 is not easy to do properly, but I think they did a good job on the overtaking opportunities.

“I think we’re going to see some good racing here with the long straights and with them starting with a slow speed corner, that means you can follow closely.”