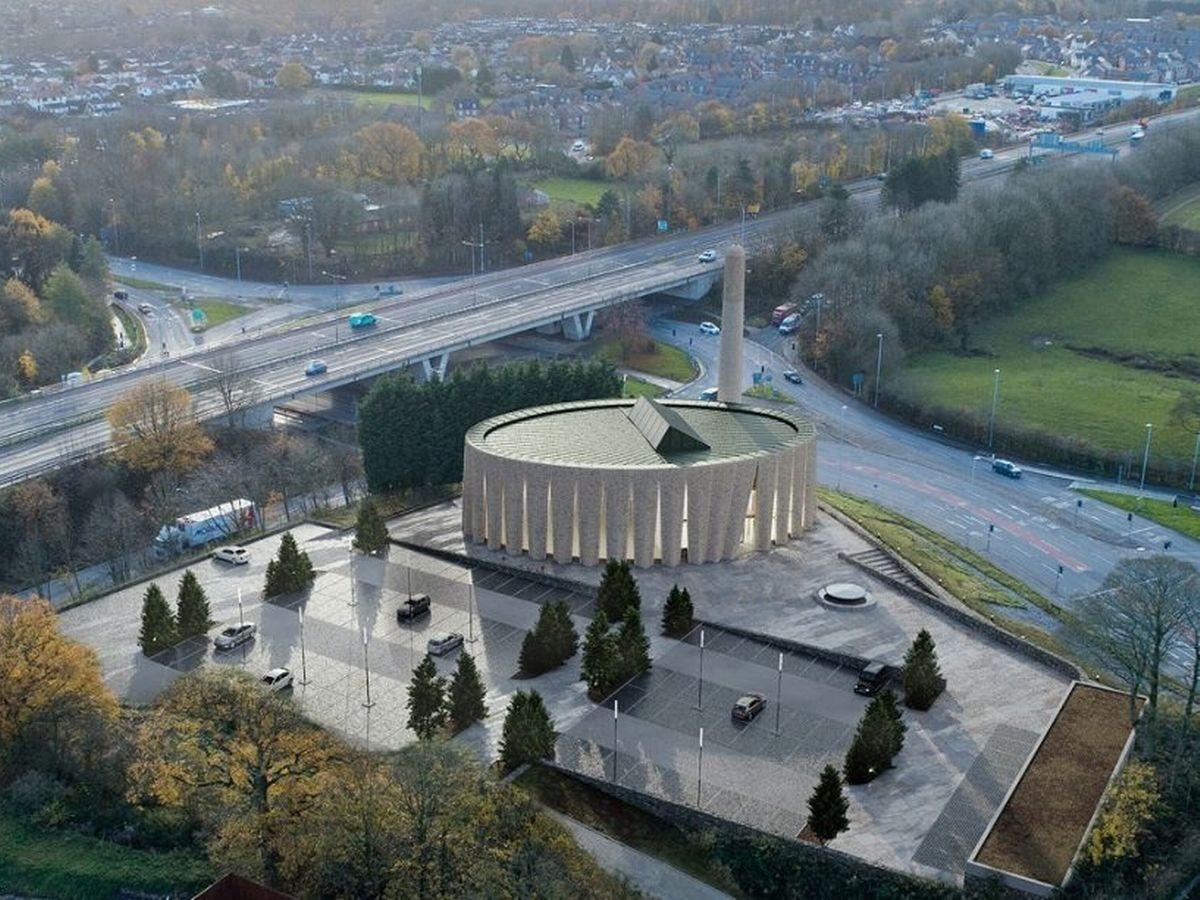 However, opponents of the project have claimed that the striking structure cannot achieve both the landmark status it seeks while being suitable for the small plot of land set aside for it.

It’s one of many competing puzzles a planning inspector will now have to wrestle with as he considers recommending that the government grant permission for the Brick Veil Mosque, which would be built on a site along the Broughton roundabout at the A6, M55 and M6 interchange.

Darren Hendley heard nearly 50 hours of testimony over more than a week – wrapped in a claim and a counterclaim – on whether the scheme should ever be allowed to proceed.

The proposed land for the new mosque is an elevated plot of land that was previously used as a compound when the Broughton Bypass was built more than five years ago (Image: RIBA)

These arguments – which focused on issues such as the appearance of the planned building, its necessity and the effect it might have on a nearby listed church – were repeated on Wednesday afternoon as representatives of all interested parties in the investigation summarized their case.

The plan for the mosque – a three-storey, 12-metre-high building with a 30-metre-high minaret – emerged from a global design competition organized by the Royal Institute of British Architects.

Peter Black, the solicitor acting for Broughton Parish Council – who opposes the proposal in its current form – told the inquest that ‘in parts of Preston this building could be an asset’.

However, he added: “The development has been designed as a prominent and iconic structure which by definition will dominate – but it is claimed that it will not affect the residual rural and open character and appearance of the site and its surroundings. surroundings.

“The developer can’t have it both ways – it can’t be an iconic structure that’s also low-key in the landscape,” Black said.

However, the solicitor representing the firm that proposed the project – Preston-based architecture and planning specialists Cassidy + Ashton – said “exceptional quality design” ensured the venue of worship would be appropriate for its proposed location at any given time. of the busiest junctions in Preston.

Christiaan Zwart said on the final day of the inquiry process: “The development would simply be a brilliant place of worship, in the form of a mosque, for a big city – bold but subtle. [and one] this would result in social inclusion and cohesion.

“It’s the best of sustainable development. [The] economic, social and environmental, linked for the future.

The site is designated as open countryside, which brings it into conflict with the planning policies of Preston and central Lancashire which would generally not allow the type of development proposed on such a plot.

However, in February, members of Preston City Council’s planning committee gave the green light to the project after authority planning officials said the scales had tipped in its favor due to other considerations. physical – such as a policy to ensure the provision of community facilities.

Representing the City Council at the inquiry, solicitor Piers Riley-Smith suggested the mosque would bring a range of benefits to Preston in addition to meeting the need for a new place of worship.

“This is a program that the council welcomes at the gates of the city of Preston. It would serve as a landmark, telling those arriving that this is a city that is proud of its heritage, its socially diverse and inclusive community, and its exceptionally designed and sustainable built form,” said Mr Riley. Smith.

He added that the intention to open the building for general community use would encourage “the engagement of people of different faiths”.

Meanwhile, Mr Zwart stressed that there was only ‘one community’ in Preston – and said the fact that members of it felt able to voice their opposing views on the mosque during the survey was an “important feature of social cohesion”.

Nevertheless, entrenched divisions between the parties over the merits of the mosque on the proposed site remained visible until the end of the investigation.

Peter Black said the adequacy of the parking arrangements was based on assumptions that a “heroically high level” of travel to the building would be in shared cars or on foot.

“From the south of the M55, where most of the demand will be, a walking route would require a torturous and unpleasant crossing under the [motorway]“said Mr. Black.

He also claimed that the ‘heartfelt’ testimonies given by members of the Muslim community about the need for a new mosque in the parish area of ​​Broughton were nevertheless ‘anecdotal’ – and called on the inspector to make his recommendation on the base of Broughton, Preston and Central Lancashire Planning Policies.

“Nothing we’ve heard has changed our view that this is a speculative application to land in a designated campaign that the developers own,” Black added.

Christiaan Zwart countered that the mosque’s car park management plan represented a responsible approach to alleviating a potential problem – and claimed there was “a latent, but now manifest, need for a mosque in North Preston “.

The survey heard that there were 311 Muslim households in the vicinity for whom the Brick Veil Mosque would become their nearest place of worship.

Mr Zwart also said Broughton Parish Council could not try to import policies ‘by the back door’ into its own ward plan that were not specifically mentioned in the document.

He added: “We have a neighborhood plan that has an inordinate amount of reasons and justifications, but not a lot of policies.”

The lawyer also accused the parish authority of including unsubstantiated ‘claims’ in its closing statement – and urged the inspector to check them before relying on their accuracy.

Darren Hendley will now write a report setting out his recommendation – and the reasons for it – to the Secretary of State for Levels, Housing and Communities, a post currently held by Greg Clark MP after Boris Johnson sacked Michael Gove last month shortly before announcing his own resignation.

The minister, who is not obliged to follow the inspector’s recommendation, should render his decision before the end of the year.

The bid for the mosque was ‘called’ – giving the government the final say on the matter – after representations from Wyre and Preston North MP Ben Wallace and Preston Councilor Graham Jolliffe following the endorsement of the plans by authority earlier this year.