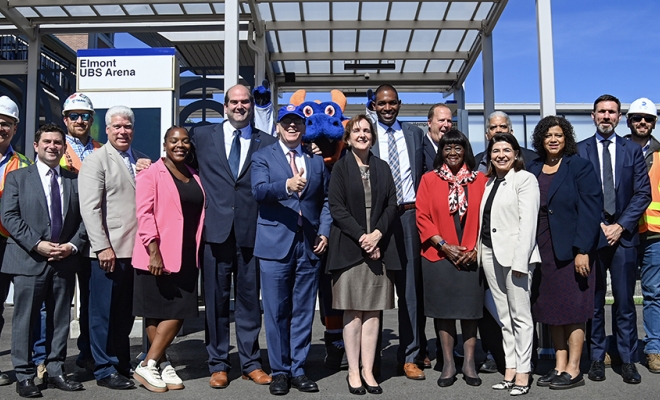 Governor Kathy Hochul today announced that the Metropolitan Transportation Authority’s Long Island Rail Road Elmont-UBS Arena station, the first new LIRR station in nearly 50 years, can now accommodate eastbound and westbound trains on weekends. UBS Arena event and will begin full-time year-round service by the end of 2022. Starting today, Long Islanders who live east of Belmont Park will have a place to hang out. go directly to UBS Arena events. This will reduce commute times and should increase the number of event attendees who use public transportation, helping to ease traffic congestion on Long Island. Those traveling from New York can now return directly after the events on many trains without needing to board a shuttle to Queens Village station that was offered last year.

“Having both modern, accessible platforms open at the world-class Elmont-UBS Arena resort is a win for Long Island and New York State,” Governor Hochul said. “New Yorkers will now enjoy a smoother commute to and from Islanders games and concerts, and I look forward to continuing to bring transformative projects like this to every corner of the Empire State.”

“Infrastructure is what allows the state and Long Island to thrive both socially and economically,” said Lieutenant Governor Antonio Delgado. “With projects such as the Main Line Third Track, Grand Central Madison and this new Elmont-UBS Arena station, New York is providing Long Islanders and Island visitors with a modern, world-class and resilient rail system that will also help reduce traffic congestion.”

The construction of the new station is free for the LIRR and the MTA. Arena developers and New York State have partnered to fully fund the estimated $105 million project. Of the total cost, over 90% was paid for by the arena developers, with New York State contributing the remainder. The state contribution represents a fraction of the new tax revenue that the project should generate. This project shows the transformation that public-private partnerships can have on public transport.

The Elmont-UBS Arena station features two 12-car high-level platforms with awnings, USB charging stations, assistance points, security cameras, digital signs with train arrival information , Wi-Fi and a state of the art snow melting system embedded in the concrete of the platforms to ensure they remain free of snow and ice during winter storms. The new station is fully Americans with Disabilities Act compliant, with a wide pedestrian overpass designed to accommodate large crowds and two elevators, one for each platform.

MTA President and CEO Janno Lieber said: “UBS Arena has had a packed schedule of huge events since it opened last fall and with both platforms now in operation, New Yorkers will have direct rail access to Islanders games, concerts and other events. Completing the third runway and opening service at Grand Central Terminal, this Elmont project on time and on budget shows how we are dramatically increasing service, convenience and options for LIRR customers.”

Catherine Rinaldi, Acting President of Long Island Rail Road and President of Metro-North Railroad, said: “The MTA has made a massive investment in the future of Long Island with megaprojects like the third track on the main line, a new LIRR concourse at Penn Station, and a new terminal at Grand Central Madison. The Elmont-UBS Arena station in is an example of the great things that can be done by investing in local infrastructure. The opening of the two platforms creates a new option for people to travel to events at the arena and this will help improve the environment reducing traffic on local roads.

MTA Construction & Development President Jamie Torres-Springer said: “This is the first new LIRR station in nearly 50 years, delivered on time and under budget. Through innovative construction techniques and relentless project management, we are delivering on our promise to have the Elmont-UBS Arena station ready for two-way service in advance of new Islanders season.”

Empire State Development Council Chairman Kevin Law said: “Having westbound and eastbound hubs operational at the Elmont-UBS Arena station will improve service for Long Islanders and stimulate economic activity by connecting commuters to area businesses and events at UBS. Arena. Under Governor Hochul’s leadership, New York State will continue to provide modernized and improved service on railroads and subways that will keep New Yorkers moving because economic growth and reliable public transit will together. “

State Senator Leroy Comrie said: “As we seek to move our state toward a more sustainable and environmentally friendly future, having westbound service to the newest LIRR station in 50 years at the Elmont-UBS Arena station, will provide a one-seater route to the site that will reduce congestion and encourage public transit Investing in public transit produces lasting benefits in local communities and leverages public-private partnerships, is a necessary step to reinvent transportation in New York I want to commend Governor Hochul, UBS Arena Partners, and the MTA/LIRR teams who have worked so closely with me and my colleagues, but most importantly with the local communities to see this station pass from concept to reality.”

State Senator Anna M. Kaplan said: “The new Elmont Station is a critical investment in our community that will allow Islanders fans to take the train to the game and finally provide area residents with a full-time stop on the LIRR Main Line. The new station is a shining example of the great things we can accomplish when we invest in Long Island’s infrastructure, and it’s a testament to all of the workers who have shown up throughout the pandemic to do so in the on time and within budget.

Assembly Member Michaelle C. Solages said: “With the start of two-way event day service at LIRR Elmont-UBS Arena station, we are one step closer to fully achieving a long-standing goal on behalf of residents. Since its inception, we have strived to make This redevelopment projects a positive experience for the Elmont community, and these changes will only improve the overall efficiency and convenience of the LIRR Can Depend on year-round.

Kim Stone, Chairman of UBS Arena, said: “In just 30 minutes, fans can easily travel from Penn Station to UBS Arena via the Long Island Rail Road. With the new east and westbound service at Elmont-UBS Arena station on event days, even more New York now has easy access to our incredible place.A big thank you to Governor Hochul, Lieutenant Governor Delgado, the State Legislature and all the hard working men and women of the Long Island Railroad.

Gerard Bringmann, LIRR Commuter Council Chairman and MTA Board Member, said: “Today’s launch of event-specific two-way service at Elmont Station is the next big step for this first new LIRR station in 50 years, coinciding with the start of the Islanders’ 50th anniversary season. The UBS Arena has a lot to celebrate – and once access to the side is complete, we will also see more regular service for the community. This station is one of many major LIRR improvements coming this year, helping to make public transit the first choice for even more Long Islanders and encouraging people across the region to take the train when they visit Long Island. The best way to keep riders coming back is to continue to invest in them, with new stations like Elmont and with service that meets their needs.

GO-505, SMART Transportation Division General President Anthony Simon said: “The new Elmont Station is another example of MTA/LIRR’s commitment to improving both the commuter experience and service during special events. The addition of the westbound hub completes the full benefit of the station and will provide more options to and from the new UBS Arena. We thank all of our hard-working union brothers and sisters for another successful mega infrastructure project. Thank you to Governor Hochul for her support and its ongoing commitment to MTA/LIRR commuters and the communities it serves.

Islanders co-owner Jon Ledecky said: “Elmont Station provides an essential transportation option for hockey and music fans traveling to and from UBS Arena. Taking the train is the most sustainable way for our fans to get to games – it’s is fast, it’s efficient, it’s efficient and it’s only 30 minutes from Penn Station.”

The station features a new artwork unveiled today titled Cyclical Everything by artist Shawna X. The artwork uses an oval motif intended to depict the nearby racetrack and arena, as well as the evolving and transformative nature of Elmont, and the many distinctive cultures at home around this historic attraction. Metal panels, placed in the balustrade that runs along the south platform and in the ramp of the north platform, capture the rhythmic form using bold black lines. The station’s overpass is enlivened by a series of ten brightly colored laminated glass panels that depict moving bodies, referencing musicians, athletes and performers in the brand new UBS Arena.

The Elmont-UBS Arena station began service to coincide with the New York Islanders’ first home game in November 2021 at the brand new UBS Arena. Additionally, the site has invested in additional capital investments in the surrounding area near the station and on its campus to further enhance the on-site customer experience. They will also work alongside teams and venue partners to deliver a variety of different incentives to fans to encourage them to take the train to UBS Arena throughout the season.

When LIRR service to Grand Central Madison begins at the end of this year, the Elmont-UBS Arena station will become a full-time station on the Hempstead branch with service 365 days a year.