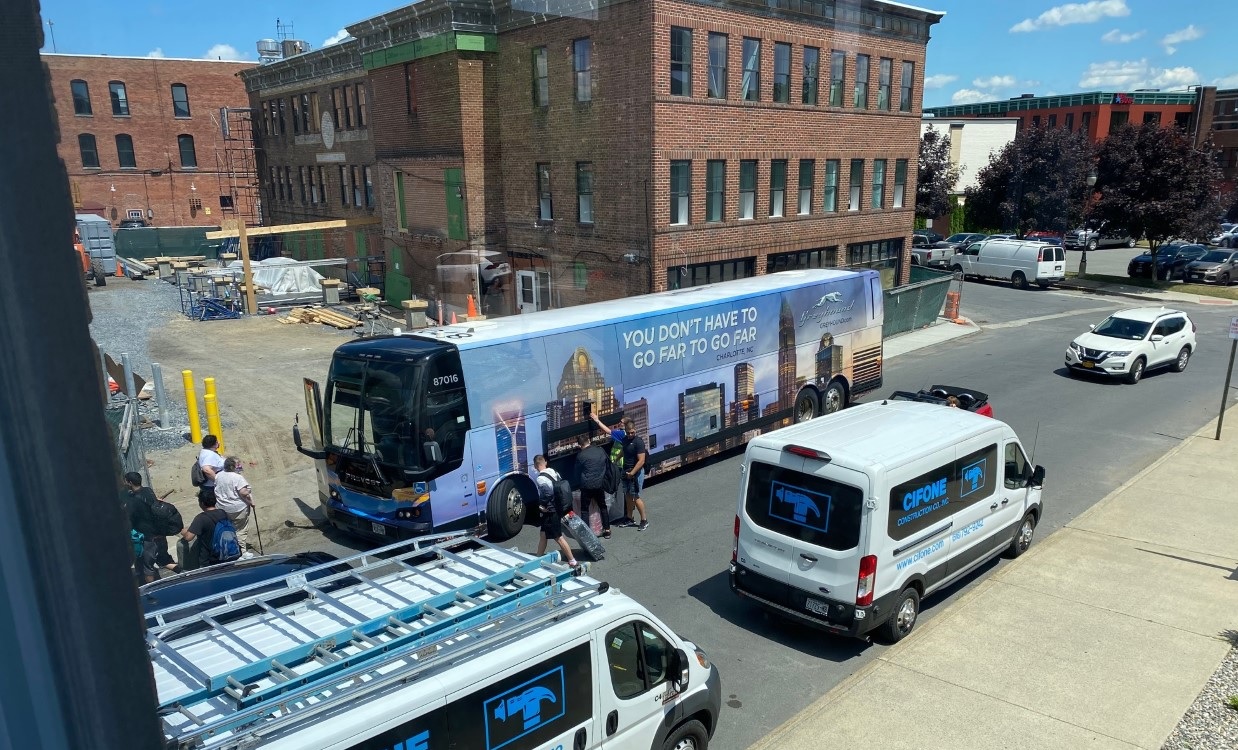 GLENS FALLS, NY (NEWS10) – The section of Elm Street closest to Centennial Circle is narrow. Located between the freeway-adjacent thoroughfare of Hudson Avenue and increasingly busy Park Street, it struggles to accommodate parking spaces in addition to two-lane traffic.

Not to mention the Trailways and Greyhound bus systems that stop there. A parking lot used by buses – between Empire Pizza and a building being renovated – has been closed for public use. This has created a problem of gridlock, which the city is working to resolve. As of this week, there is no parking or stopping for vehicles on this block.

Get the latest news, sports, weather and events straight to your inbox!

“We had heard complaints earlier this year,” Glens Falls Mayor Bill Collins said Wednesday. “I thought they were overdone. I have to tell you; I didn’t give this the credit it deserved.

Collins, who took office as mayor earlier this year, took part in a meeting earlier in the year regarding the potential construction of a higher car park on Elm Street, where an open car park currently serves several businesses on Elm and Glen Streets. The idea was to create a hub for public transit, including buses like those active just a block away. At that meeting, he heard from several business owners who spoke about how bad things had gotten on Elm Street, citing several buses clogging the street at once.

One such business owner was Robin Barkenhagen, owner of 42 Degrees, a glass art and pipe store on Glen Street. Prior to the current location, the Barkenhagen company operated at 15-23 Park St., a building later purchased by developer and businesswoman Elizabeth Miller. Miller and his son are currently completing renovations to this building, which will soon open as the Park & ​​Elm Cafe and Market.

Fire Tower Trails: A Unique Hike in the Adirondacks

The renovation process required the parking lot formerly used by Trailways and Greyhound to be fenced off – and it will no longer be open to the public once the new business opens. This blockage is to blame for more buses on the street – but when Barkenhagen looks back at his old storefront, he says the problems predate the new project.

“Every day the buses stopped,” recalls Barkenhagen, whose business operated on Park Street for nine years before moving. “Between 3 and 4 p.m. was the worst time – there were 2 or 3 buses piled up in the parking lot, with no room for them. If there were two buses at once, the second would physically block the aisle. No one could come in or out.

Barkenhagen tried several ways to prevent buses from trapping its employees and customers where they parked. He says he asked the drivers to move, but nothing changed. He took pictures of the problem and complained directly to the bus companies. At one point Greyhound told him they would change where they parked – but the next day the bus returned.

Films and art screening in the new Hyde Museum program

Years after leaving this property, the subject arose between Barkenhagen and a city employee, who was surprised to learn of the seriousness of the problem. Collins was also surprised.

Another voice speaking out on the matter was Mark Levack, who operates Levack Real Estate from an upper floor at 33 Park St. – giving him a great view of the street. He came to Collins with photos of bus passengers retrieving luggage from the bus as they stood in the middle of the street, dodging traffic in order to do so safely. He also showed the mayor’s video of one bus backing into another, and another four buses clogging the street at once.

“The site is not large enough to handle bus traffic and customer traffic simultaneously,” Levack said. “No company should be allowed to do business on a public road where traffic is blocked.”

Parking on a postage stamp

Late last week, Glens Falls City Council passed a law prohibiting the parking or parking of vehicles on the affected section of Elm Street. Signs to that effect have increased this week and the Glens Falls Police Department began issuing warnings to those who break the new law late last week.

Meanwhile, the conversation highlighted a problem that doesn’t go away. The town of Glens Falls is tight-knit and compact. City officials have been working to find a new transportation hub for the bus lines for some time, and the question hasn’t gotten any easier to answer. Barkenhagen says he would have backed the idea of ​​a parking garage for the Elm/Glen lot — but the city didn’t get the funding it needed for it.

The question of where to look next is up to the planning council. Collins says the conversations included finding a spot along the Hudson Avenue corridor, which leads to Northway exit 18. Another idea is the Aviation Mall, just above the Queensbury line, where Greater Glens Falls Transit buses already run daily.

Why was the Glens Falls car park closed this week?

Wherever the city puts its efforts next, the good news is that at least one of the bus lines has become more involved in the conversation. Collins said a representative from Trailways recently visited Glens Falls after being contacted about the problem and immediately agreed on its seriousness after seeing it for himself. Now they have become willing to move to where they do their business. This is good news for current and former neighbors of the bus line.

“I’m glad they’re doing something,” Barkenhagen said. “We are a postage stamp in this town. There’s not much space anywhere, but the worst place for it is where he is now.

Barkenhagen suggests the city purchase the parking garage adjacent to 333 Glen St. in the city, located in a location that can handle significantly more traffic. He also said the bus problem was not what motivated him to move 42 Degrees – it was simply the timing of Elizabeth Miller’s purchase of the building.

Guide: What’s on the agenda for the Adirondack Film Festival?

Collins sees the issue as a learning experience. Complaints around Elm Street predate his time as mayor by many years, and he himself admits he didn’t understand the problem until recently.

“I learned that I needed to pay more attention to complaints and see their merit. I hadn’t done that at the start of the year,” he said.

Trailways and Greyhound did not respond to requests for comment Wednesday.