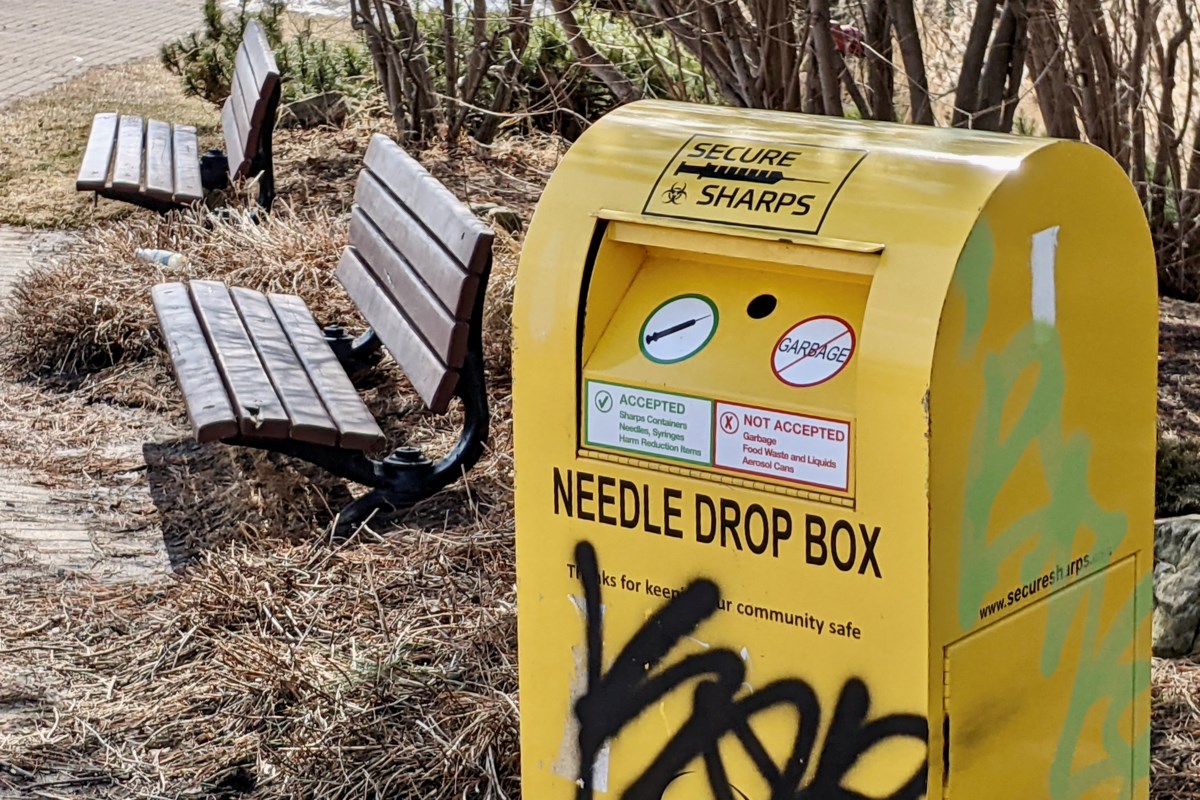 Councilors will consider a motion to that effect on Monday.

Barrie Fire Chief Cory Mainprize says the cost of renting and collecting needle kiosks is about $25,000 a year, but his recommendation to remove them isn’t based on funding.

“Mainly what we’ve seen, because we’ve collected about 18 months of data now, is that the program doesn’t seem to be successful,” he said. “The bins (kiosks) are continuously filled with garbage. We empty them every month…they are so full of garbage that even if people wanted to put needles in them, they couldn’t.

“There seems to be a very, very low collection rate.”

In November 2020, council approved a motion to use city resources to support Simcoe Muskoka’s Opioid Strategy and address the overdose crisis. Methods included setting up multiple syringe exchange bins in parks or parking lots in Barrie on a pilot basis, in addition to containers already located with park restrooms, and installing naloxone nasal spray kits in the a one-year pilot project in city facilities close to the public. Automated External Defibrillators (AEDs) available for public use.

The city received monthly reports of the total weight collected from each kiosk, but collection and weighing was unable to differentiate between the weight of the needles collected and the weight of other products discarded at the kiosks.

Photographs showed that the kiosks were often contaminated and contained much more waste than used needles.

Several of the kiosks were also vandalized. Mainprize said some are not prominent, making them more susceptible to damage than normal trash cans or recycling bins.

“They are knocked down, crushed,” he said.

Com. Natalie Harris said she has two opinions on the motion that councilors will consider on Monday.

“I am very pleased to hear that there is a recommendation to continue with the Naloxone Public Access Project, and disappointed to learn that the syringe collection kiosks have not been used for their intended purpose,” she said.

“I would like to investigate other kiosk designs that might provide more control over what is collected in these bins. for Mental Health) and SMDHU (Simcoe Muskoka District Health Unit) are used for their intended purpose.

“They haven’t seen any reduction in the needles they find in parks,” Mainprize said. “If anything, more needles are seen around the bins than in the bins, creating additional hazards as they need to be cleaned.

“It’s only 18 months, which isn’t a lot, but we haven’t really seen any change,” he said. “They are either completely empty or completely filled with garbage.”

The cost of renting the kiosks and continuing the monthly collection is approximately $25,000 per year. No funds have been allocated to continue the pilot program after April 2022.

City staff managed the facility and provided the naloxone kits, with 27 kits installed at 19 facilities that have public access defibrillators and meet naloxone storage requirements.

The first kit was installed in the Transit Terminal in May 2021. Naloxone from city-installed kits has been administered twice at a city facility since the pilot program began. This helped reverse the overdoses that had occurred.

“We’ve had some success with this and it’s already up and paid for,” Mainprize said.

As the kits and containers have already been acquired, the ongoing cost of the naloxone kit program can be managed through the existing operational budget. Ongoing costs are associated with replacement of used or expired Narcan nasal spray, one-way respiratory barrier, latex-free gloves, and instructions for administering Narcan. No additional funding is required to meet these supplies.

Naloxone is a fast-acting drug used to temporarily reverse the effects of opioid overdoses, according to Health Canada, and can restore breathing in two to five minutes.

Monday’s motion is that the naloxone kit pilot program for providing publicly available kits at city facilities be adopted as a permanent city program, but that the syringe collection kiosk pilot program be interrupted.

If approved on Monday, the motion will be considered for final approval at the March 28 city council meeting.

Ralph Terry, Yankee Hurler Acquired by One Pitch, Dies at 86