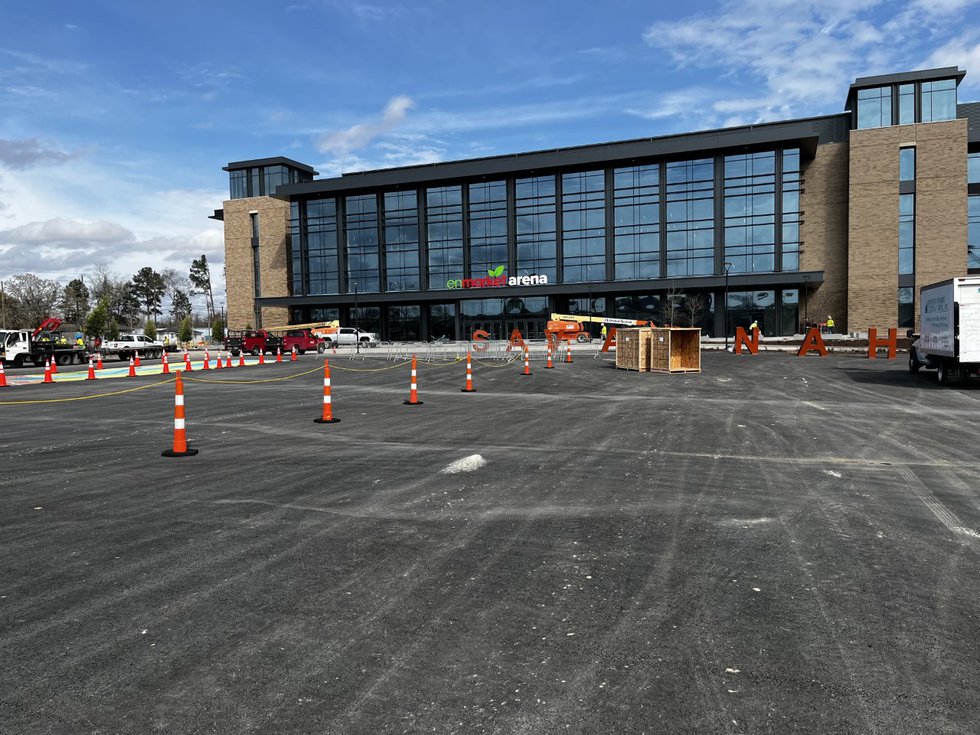 SAVANNAH, Ga. (WTOC) – The lack of parking and ongoing road construction around the new Enmarket Arena over the past two months has been a painful reminder of the city’s slow progress with public parking.

“Drive here, traffic. I don’t think the streets here are made for an event like this,” said Kendall Witmore, who attended John Mulaney’s comedy show in Savannah last week. “Parking was kind of a nightmare.”

For others, the road to the new arena was confusing, especially at night.

“I think we were only waiting 20 or 30 minutes to turn around to find our place. It was crazy. It was a lot,” said Jasmine Dorset, outside the arena after the show ended.

The Enmarket Arena opened its doors more than two months ago, but construction of a 2,000-space above-ground car park has been delayed because of what experts keep finding beneath the surface: products hazardous industrial chemicals known as PCBs.

The 22-acre site, once part of a scrap yard where cars were crushed, required extensive environmental testing and remediation. The testing process took the longest because it involved drilling core samples, said Bill Anderson, senior vice president of Terracon Consultants. He explained the prescribed process once PCBs are discovered.

“You know, not just 10 feet horizontally, but every foot, foot and a half, three feet, five feet, seven feet below the surface, so we can map the whole area that was affected,” he said. .

There’s enough impact at the site that the EPA and Georgia Environmental Protection Division have designated the land a brownfield, Anderson said.

PCBs are known to cause cancer if ingested for a long time.

Toxic chemicals are no surprise to city leaders who have been aware of them for years.

“I think it’s just a much bigger project than we anticipated when we got into it,” said Bret Bell, chief operating officer for the City of Savannah. “We would have done it anyway, but we would have given ourselves a new timeline to do it.”

The city and its contractors have been working closely with environment officials on an industrial waste remediation plan, Bell said, that includes grants to pay for it. Right now they are focusing on a plan for the back half of the property – a mostly wooded area.

As for the new parking lot which should open on the site starting tomorrow, the environmental rehabilitation is complete. The city has received permission to cover the industrial waste in place under the ground. A plug is an engineered barrier that protects it from leaching into groundwater.

“There will be an environmental clause that will apply to this property that would prevent future development in a residential area or prevent someone from putting a drinking water well through the contamination,” Anderson said.

The land, however, can be used for commercial development, including a parking lot, which isn’t expected to be fully completed until early fall, said City of Savannah chief operating officer Bret Bell. He oversees the development of the arena.

“I think it’s just a much bigger project than we anticipated when we got into it,” he said. “We would have done it anyway, but we would have given ourselves a new timeline to do it.”

The parking lot project launched is an approximately $9 million project funded by the City of Savannah’s parking enterprise fund, but Bell acknowledged that it may end up costing more due to the time required to do so. .

He was not ready to provide an updated estimate of the cost of parking because, he said, the city is still awaiting test results for the northern half of the lot where most of the soil contamination was found. .

“At this time, we don’t have an exact estimate until we start digging and figuring out how many truckloads of material we need to move and ship to the hazardous materials landfill,” he said. declared. “We will have that number in the next month.”

At $9 million, each parking spot in the lot is expected to cost around $4,500 to build. Estimates for building a parking lot were about $37,000 per parking space, or about $75 million, he said.

In this scenario, surface land is cheaper, but as WTOC Investigates learned, the $9 million parking lot is a temporary plan to prepare the ground for a new parking lot one day.

“We don’t want it to be a sea of ​​parking, long term,” Bell said. “Our original plans were to do a shared-structure parking lot with a private development,” Bell said.

The original plan didn’t work. In 2019, City Council led by Mayor Eddie DeLoach signed a 10-year lease with the landlord. The board amended the agreement in May 2020 to reduce annual lease payments to $525,000.

As part of the terms of the lease, the city will also reimburse the landlord for liability insurance for the operation of public parking and any increased ad valorem taxes. These payments began a year ago.

“By doing the parking lot, which we see as a temporary solution,” Bell said. “It allows us to improve infrastructure to widen the canal to improve roads, which encourages private development.”

As an example of private development planned for the area, Bell pointed across Gwinnett Street to the land next to Interstate 16 where a 400-unit residential complex is planned.

“We want this area to develop into a dense urban thoroughfare. We want this to be an extension of downtown with retail, potentially hotels, other uses serving surrounding neighborhoods – not a big sea of ​​sidewalks here.

When parking a bike costs more than a Range Rover