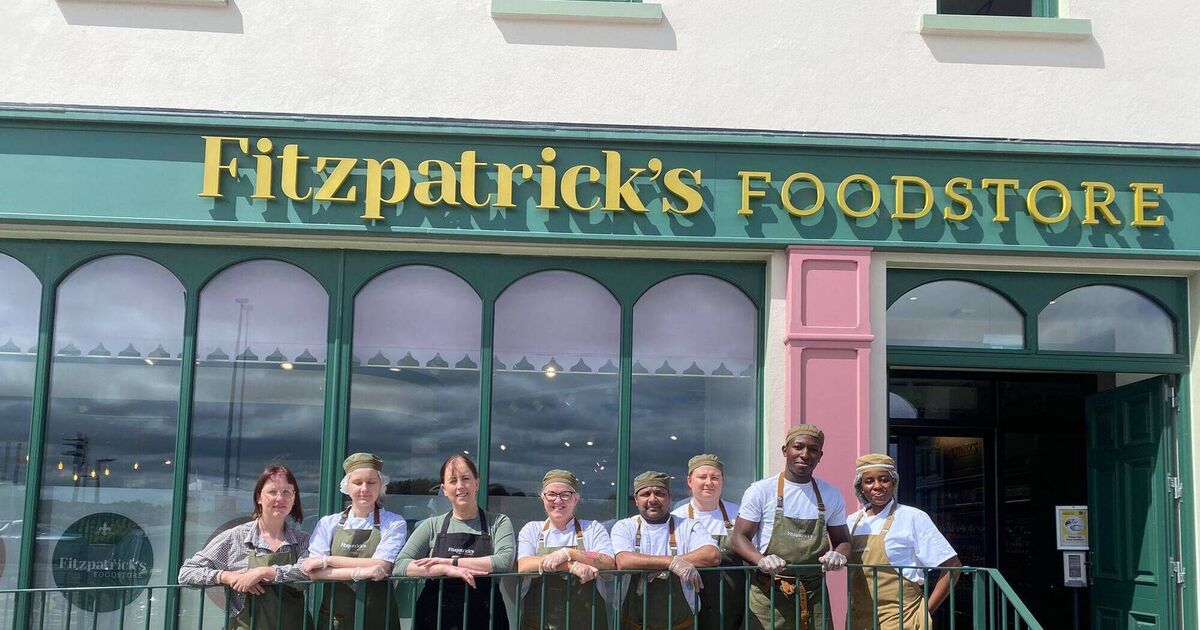 The owner of an East Cork village’s only grocery store is asking the County Council to make changes to the Dunkettle to Carrigtwohill cycle route, saying the development has halved parking spaces for customers , which caused the store to lose customers.

Next door, the owner of the village crèche, where 68 children attend each day, is also worried about the impact of the cycle path on her business, as she does not know how parents will be able to drop off and pick up their children in completely safe.

Kerri O’Neill, fourth-generation owner of Fitzpatrick Grocery Store in Glounthaune, has amassed more than 1,000 signatures calling on Cork County Council to change the width of the cycle lane outside the store. She says the store lost €60,000 in turnover last month due to parking difficulties in the car park, which is on a section of road that has been owned by the municipality for 80 years.

“We are asking the council to pinch off the section of the cycle lane at the front of the store by one metre, to allow customers to breathe, which makes it safer.

“There have been four incidents in the car park over the past month as people struggle to get in and out. It becomes a real deterrent for customers, and we have seen a huge drop in our business since construction began,” she added.

Kerri and her siblings grew up in an apartment above the old Fitzpatrick grocery store, when the Junction bar was next door. In 2018, the O’Neills applied for planning permission to hit the bar and expand the store with 18 parking spaces out front. At that time, the cycle path was planned, but no definitive plan had been drawn up.

Kerri said that after two years of construction which saw her borrow 2.5 million euros to finance the expansion, leaving her 18,500 euros in monthly repayments, plans for the cycle path were released, which allocated 12 parking spaces at the store, with four additional spaces across the road.

“In January of this year they came back and said that after measuring the area correctly we were only going to have nine spaces up front. Since then I’ve been locked in an exhausting battle to bring in some small changes to increase our parking and ensure the future of this business.

“I don’t understand why the council is doing this to a local business which employs 77 people and is the only supermarket in a rapidly growing village,” she said.

When council workers arrived to begin construction this year, Kerri used vans to barricade the area with the help of local contractors, and only agreed to move after the council agreed to 12 spaces.

“To great evils, great means.
This has put me under tremendous financial stress and every day I deal with customers who are worried that they won’t be able to find parking. Even now the parking lot is too tight and changes need to be made.

“There are a lot of families moving here and it’s unrealistic to think they’re all going to cycle to the store,” Kerri said.

Irene Heredia is the owner of Generation Education, the nursery next door to Fitzpatrick. force motorcyclists to slow down.

“It’s something that is even looked at by the inspectors when we show them around the site, it’s so important that the children can be dropped off at school safely and if the parking outside disappears, that will have a very negative impact for us. There isn’t really an alternative in the neighborhood and in the colder months it is very convenient to have easy parking outside the school. This affects also negatively parents who find our location very convenient to get to work.

“At the end of the day, I think we’ll also see a drop in enrollment if parking goes away,” she added.

Irene says she hopes “something can be done” to welcome community businesses.

Glounthaune has just over 1,400 inhabitants

Glounthaune is a small village with a population of just over 1,400, but thanks to the village’s excellent rail connectivity, it is set to become a town within the next five years with several strategic housing developments in the pipeline.

Local Councilor Anthony Barry said the cycle path will be a fantastic amenity for the local community which has been the subject of an extensive public consultation process, but the Fitzpatrick car park argument highlights the need for increase the facilities to cater to the growing community.

“The cycleway will have a hugely positive impact on the communities it will connect and it is planned to extend to Youghal, we have seen how successful the Dungarvan greenway has been and that It’s great to see these kinds of changes taking place in Cork, but when you make big changes you’re always going to upset some people.

“I’ve been to Fitzpatrick’s a couple of times in the last week, and I’ve found it manageable. Now it’s still an outdoor building site, so I think people will find it easier once the work is done. This cycle path did not come out of nowhere, and I think the parking lot will be safer than the layout that existed before, because it had no structure, “said Mr Barry.

The councilor said he was, however, concerned about the rate at which community facilities are expanding in the area, as this does not match the increase in population.

“There is a larger problem here. The village has a pub, shop, community center operates from the national school. The development plan of the commune indeed provided an area for the development of new facilities, but An Bord Pleanala (ABP) has just given the green light for this area to become another strategic housing development (SHD).

“There are plans for a new nursery in the Harper’s Creek development, but even then I don’t see how we will have enough child care and medical facilities to meet the needs of everyone in the immediate locality. Yes Carrigtwohill is a few miles further but it is already difficult to see a GP here,” he added.

Glounthaune Sustainability Committee Chair Carol Harpur said that over the past seven years the number of homes in the village has increased from 506 to 824, and that the ABP’s recent decision to allow the Ballynaroon Lands SHD to be built 112 residential units will by no means be the last major development in the area this year.

Darragh Taaffe, a partner at Keane Mahony Smith auctioneers and estate agents, was the sales agent who oversaw the purchase of 38 homes in the Lackenroe development. He said the homes sold without being officially advertised on the open market.

“We have been hit by an avalanche of requests. The houses sold very quickly and everyone had moved in last September,” he said.

“From our point of view, the cycle path will make Glounthaune even more attractive for young families. It’s the kind of amenities you’d put on a brochure next to the train station and local restaurant; it improves people’s quality of life,” added Mr. Taaffe.

Plans for a further 289 units on land adjacent to the original Lackenroe housing estate, submitted by another developer, were pulled down by the ABP in April this year after the council said the locality lacked the necessary road network to support development.

Cohalan Downing manager Susan Tyrell, who oversaw the sale of 170 homes in the Harper’s Creek SHD, said buyers can’t speak highly enough of the bike path as an amenity.

“50 families have moved in as construction is only halfway through, and many people have told me they get to work via the cycle path and then the train that takes them to Penrose Docks , or wherever they work in the city,” she said.

The section of the cycle path that has been completed connects Ftizpatrick’s grocery store and The Elm Tree bar and restaurant. Managing Director Eoin O’ Connor says it has increased the passing trade and increased the number of families coming in for a bite to eat.

“We have to commend the council for the job they have done with this section of the cycle path, it is beautifully done and decorated with flowers.

“We have noticed 100% that it attracts a different type of clientele, as young families are walking along the cycle path and then calling us, it has really made a difference,” he added.

Cork County Council issued a statement apologizing for ‘any inconvenience’ caused by the ongoing construction work, adding that they are ‘confident that when completed this much-loved cycleway will have significant value in the future. from an economic, social and environmental point of view”.

The council said it had obtained planning permission for the pedestrian and cycle route and engaged with stakeholders along it, from Bury’s Bridge to Carrigtwohill, ‘including Fitzpatrick’s Shop’ .

“Engagement continued throughout the detailed design and construction stages and continues,” they added.

The intercity cycle route will link Dunkettle to Midleton when completed and then to Youghal via the Midleton Youghal Greenway. Planning permission for the remaining 2.6km of the road to Midleton has yet to be obtained.

Inverness prison moves ahead with planning a raid