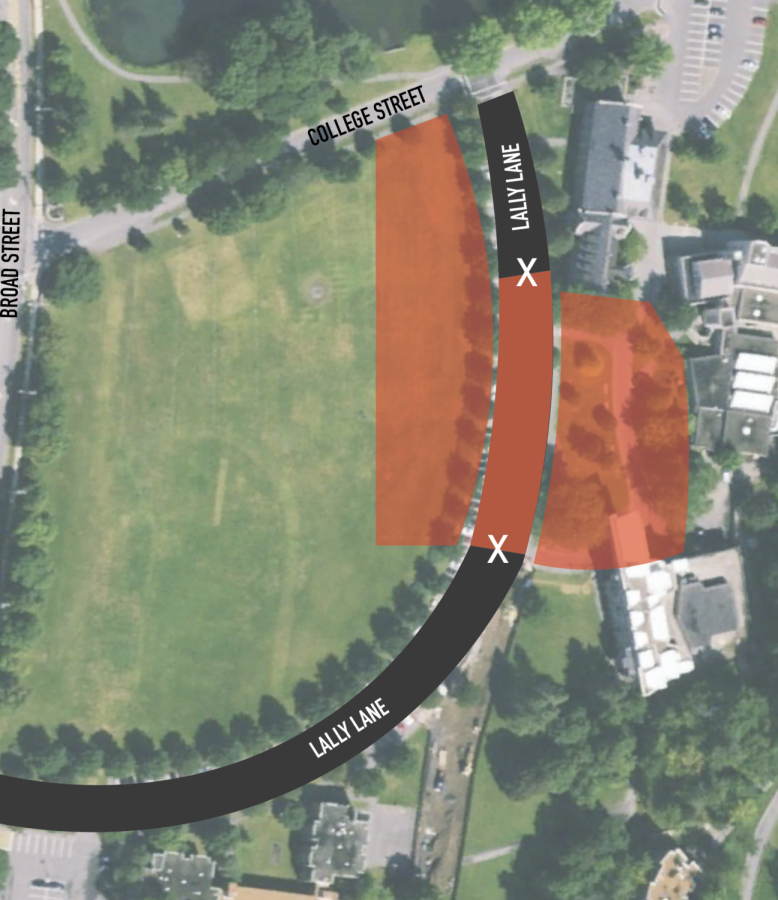 Amid several ongoing construction projects, Colgate students who have cars on campus face reduced parking options. The few spaces available have become more limited with the closure of the lot behind Olin Hall and the partial closure of Lally Lane, disrupting parking and a major thoroughfare on campus.

Campus Safety Director Terri Stewart explained that the recent decrease in parking options is primarily due to two construction initiatives.

“We have two ongoing construction projects that have resulted in the loss of some parking spaces on campus, both for the renovation and expansion of Olin Hall, and now for work underway to build the Benton Center for Creativity and Innovation,” Stewart said.

Olin Hall’s renovation and expansion project resulted in the closure of the adjoining parking lot on Oak Drive, resulting in a greater scarcity of upper campus parking for faculty during the academic day. Down the hill, the more recent construction of the Benton Center for Creativity and Innovation means that a considerable part of the parking spaces on Lally Lane – particularly those closer to the intersection with College Street – will no longer be options viable for students or teachers. .

No changes in parking regulations have been introduced for the 2022-2023 academic year. Parking restrictions Monday through Friday 7 a.m. to 4:30 p.m. and Friday through Sunday 3 a.m. to 7 a.m. remain in place. As competition for parking spaces grows, Campus Safety is given greater responsibility to regulate the lots on campus.

To accommodate increased demand for parking in the general purpose lot adjacent to Community Memorial Hospital and the Reid Athletic Center, university officials announced in a Sept. 8 message that all students with registered vehicles by Colgate would be permitted to park in the 113 Broad Street lot. , a major change from the standard parking policy. As general parking pass holders can now park overnight in this parking lot, the spaces available during the college day have decreased.

At the time of this post, there is no additional parking reserved for off-campus parking pass holders who have previously reserved access to parking spaces at 113 Broad Street Lot during the college day. With the partial closure of Lally Lane and recent changes to this lot, some students are noticing that finding a space is increasingly difficult for off-campus parking pass holders. They also note safety issues caused by traffic changes without notice or proper signage.

“As an off-campus student, the new construction on Lally Lane is an extreme nuisance. It’s brutal trying to find a parking spot to get to class,” said Brynn Kauffman, senior and off-campus resident.

“As well as the existing road barriers, you may notice that additional signs have been added to alert drivers to Lally Lane being partially closed as new steam lines are laid in preparation for the construction of the Benton Center for Creativity and Innovation. “said DeVries. “While we understand that navigating the partial road closure is an inconvenience, it was decided to keep sections of the lane open in an effort to save as much parking space as possible during construction. We thank the community for their patience and understanding as the University strives to build one of the anchors of the Intermediate Campus Plan for Arts, Creativity and Innovation.

“The lack of options has definitely created competition for students,” Subak said. “Last semester I didn’t have to think much about finding a weekend parking spot, but now I have fewer options and from those few spots I can never really find one. parking space.”

“I brought my car here to speed up the process of getting off campus and running errands, but I end up spending so much extra time walking to my car that it feels more like a burden,” Hoerle said.

In addition to the effects of construction, students say they have also felt an increase in the number of parking tickets issued compared to previous semesters. The Colgate Maroon-News could not verify any change in the frequency of offenses issued.

Hoerle said she felt unclear about the regulations and that she and many of her peers had been fined since returning from summer vacation for not knowing the correct restrictions.

“Last year I never got a ticket for keeping my car up the hill on Fridays and Saturdays because they made it look like it was allowed, but the first time I got it did this year, I got a ticket for parking overnight,” Hoerle said. “Now on weekends I park down the hill because I’m afraid I’ll get another ticket.”

Campus Safety is aware of this complaint. Stewart pointed out that overnight parking regulations for on-campus lots have always been the same, but enforcement and citation efforts have been increased due to more complaints and violations and changes in the availability of parking spaces.

“Recent enforcement efforts in this area have been intensified due to the large number of complaints and violations that have come to the attention of Campus Safety,” Stewart said. “Campus security conducts continuous patrols and issues citations for infractions either on sight or upon receipt of a parking complaint by a community member.”

“We understand the challenges created by the ongoing construction and campus security officers have been instructed to exercise considerable care in issuing citations, while maintaining order around parking and traffic control. traffic,” she said.

However, Stewart noted that Colgate is currently in the process of adding another option for up-hill parking, one that will hopefully alleviate some of the issues currently being experienced.

“The good news is that two new parking lots with more than 30 spaces have been built behind the Saperstein Jewish Center and Human Resources to help make up for some of those spaces lost due to construction,” Stewart said.

These new parking spaces would help compensate for some of the spaces lost due to construction and create more options for non-night parking up the hill on weekends. While this will not solve all parking issues, Campus Safety would like to point out that this is a temporary setback for students during the process of major campus improvements.

“We think this temporary inconvenience will ultimately be very helpful,” Stewart said. “The resulting new facilities will bring many new opportunities, as outlined in the 3rd century plan.”